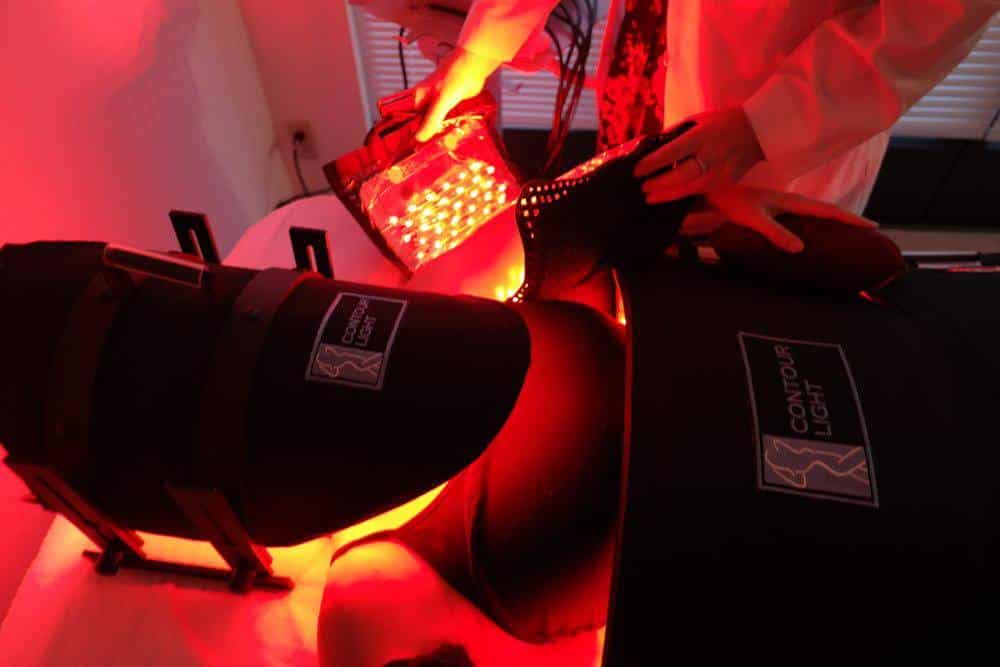 For centuries, humans have been looking for the “fountain of youth”. Well, you found it. On this page. So, congrats! Completely rejuvenated skin is upon you 🙂

Red Light Therapy
– What is it?

Red light therapy uses light-emitting diodes (LEDs) to treat medical and cosmetic conditions. It stimulates healing by sending low-intensity red and near-infrared light into the body’s cells. The procedure is non-invasive, painless, and does not use heat.

Here’s a closer look into Red Light Therapy or RLT.

How does Red Light Therapy work?

During red light therapy (RLT), the skin is exposed to specific wavelengths of red and infra-red light to stimulate the cells.

You can easily demonstrate the power of red light by holding a flashlight in front of your finger or hand. What color does your finger or hand have now? Yes, it’s red! We can see from this that red light can easily pass through our body tissues. Red light penetrates tissue best because of its wavelength range. Light energy is better absorbed by the parts of cells that capture it.

“My skin and body have never looked or felt this good”

Red Light Therapy
– The Many Benefits

It is possible to improve chronic skin conditions such as:

Red light is good for your skin and improves its health.

RLT has also been found to help with:

To understand light, you need to know how it works – it’s an electromagnetic wave. As humans, we can see only a tiny portion of the entire electromagnetic spectrum. In addition, there are radio waves and X-rays. The difference is simply the length of the wave.

What makes these two wavelengths so cool?

They penetrate deep into the skin, reaching our subcutaneous fat layer, organs, and bones, causing positive changes in your body. The positive effects of light are primarily due to how it interacts with our mitochondria, a crucial component of our cells.

Studies on the effects of Red Light Therapy

Over the past few decades, a staggering amount of research has been conducted. Thousands of studies have proved the effectiveness of RLT.

It is shown that RLT can improve cognitive function, bone health, reduce inflammation, reduce neck pain, and help with depression, among other things. That’s why RLT is becoming increasingly popular, not just because of bold marketing claims but also because of a staggering amount of scientific evidence.

How Red Light Therapy Can Help You Lose Weight

Believe it or not, but 118 participants lost an average of 2.49 inches with only one session in an IRB-approved Clinical Trial. (Check the Clinical Trials Official Government Website: Ref #NCT04451824.)

You can learn more about how Red Light Therapy can help you lose weight and drop quickly and safely here.

Thousands of years have passed since humans intentionally exposed themselves to sunlight. We found that the Egyptians used so-called “heliotherapy” and that Hippocrates prescribed frequent sun exposure to his patients due to his observation that the Greeks were generally happier than northern Europeans (who had less sunlight throughout the year).

1666 Isaac Newton discovered that light has many wavelengths.

1879 Thomas Edison invented “light on demand” with the light bulb.

1893 Red light was used as a medical therapy to treat smallpox and lupus for the first time.

1956 As a result of the discovery of phototherapy children with jaundice were successfully treated.

1993 LED production became more affordable in the early 90s, accelerating the entire process. NASA discovered in the same year that red light increased plant growth and could heal wounds. Because of this, RLT was subsequently subjected to extensive research.

2008 The scientific journal Photomedicine and Laser Surgery published a critical study on how red light affects our mitochondria, which affects our immune system and reduces inflammation.

2016 Studies after studies have confirmed that RLT reduces inflammation in the body, as initially predicted but now confirmed.

2022 There is an explosion of demand for RLT in 2022! The future of Red Light Therapy is here, from at-home devices to highly effective fat reduction treatments.

Red Light Therapy: Is it safe?

Yes. RLT is 100% safe. This statement refers exclusively to LED-based red light therapy devices (which we use), not at-home low-level lasers or infrared heat treatments that may result in burns.

Some of the devices used today to help Red Light Therapy are:

There is no doubt that some devices are better than others.  Therefore, be cautious, you pay for what you get.

You will find that RLT is an excellent tool to add to your skin care regimen. Research on RLT as a treatment for some skin conditions has not yet reached a consensus.

A LED’s proximity to the skin can make a big difference, depending on the overall result. If you want to reduce fat, the light should be emitted as close as possible to the skin. Thus, a full-body wrap, or one specifically to wrap your waist, thighs, legs, arms, etc. Many high-quality wall systems, like Joovv or Mito, are also available, but these systems will cost you $1000-$10,000.

Where do you
want to book?